The company was founded in 1990 on Hollywood Road, Hong Kong. Since then, it has attracted dealers and collectors with magnificent antiques such as ritual bronze vessels, Buddhist sculptures and early ceramics.

The Mastery of Shapes and Motifs in Ancient Chinese Bronze Vessels


Similar to many other plain jue, the vessel is casted with only three thin thread-relief lines, which horizontally wraps around the main body. This minimally decorated jue, when put together with an intricately adorned rod, perfectly supports and enhances the beauty and floridity of the design work on the rod.

The rod is in itself a figurative, openwork plague. Its upper section is made into the form of a bird's profile with features meticulously rendered. Its hook-like beak projects upward, hinting at pride and dignity. Its tense and large eye with narrow tips emits fierceness and virility. Its clinched craw is enlarged disproportionately, as if to enforce its determination to snatch a prey. The entire profile is encircled by an outline with sharp hooks, which further radiate and enforce the birdšs intimidation in territory making. Yet, the animal also has a soft side; its body is embellished with a pattern of meandering curves twiddled playfully, ending with two feather-like shapes, slightly fluttered and tossed. 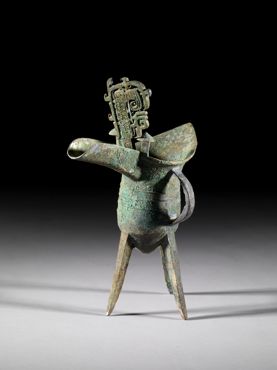 
This incredibly exquisite jue stands upon the pointed but stable end tips of three firm legs. On the main body, the vessel exhibits its delicacy through a band of taotie that is intricately casted in sharp and slender contours. The taotie contains two small bosses as eyes; and above the eyes, it spreads outward away from the central flange, stretching towards the boundaries of the jue. Yet below the two eyes, the taotie elegantly curls inward towards the flange, tightening and contracting in shape. In addition, above such taotie mask, the vessel is adorned with upright blades filled with subtle, sunken swirls. At its top, the vessel is casted with two tall post caps as well as a dense and secured looking spout.


This extremely delicate you is characterized by its oval-shaped vessel body. Throughout its surface, the vessel is embellished with a bloom of extremely fine taotie motifs; some with protruding circles as eyes, and some seem to be emerging out of the vessel surface with a focused gaze. At the neck area, the you is decorated with a band of dragon motifs that are intricate and compact. Visually, these dragon motifs with complex details balance the mostly plain and wide outlines of the taotie below, making the vessel intriguing but easy to look at. In addition, the vessel is casted with a handle very beautifully curved, and with zigzag triangles as decorations. And at its lid, the you is adorned also with an intricate band of dragons, which profile is more iconographic. 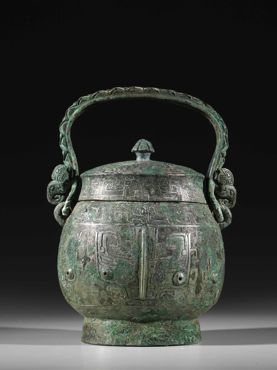 
Although petite in size, this bronze zhi exhibits tremendous strength. It embraces a strong sense of vigor with the help of its calculated proportion, and its centrally organized motifs. This delicate zhi is casted upon an oval base that is unusually large, elevating the vessel as if to slip in an aura of uplifting pride and worthiness. Upon the secured base, the main vessel body is seen casted in a pear-bulging form. The expanded body is appropriately contrasted by the inward tapering of the vessel towards the neck area; hence tension is formed between the two convex and concave curves. Such tension seems to be subtly relieved at where, above the neck, the vessel gradually protrudes outward towards the opening. Finally, the oval opening of the zhi echoes with the shape of the base, bringing an overall unity to the vessel.

The curves of the vessel match wonderfully with the location of the motifs. At the most swelling section lays a confronting taotie in relief; the protrusion pushes the motif further outward, hence enhancing its alarming intimidation. At the areas where the vessel bends inward lay two registers of similar-looking bird motifs. The inwardly decorated bands of birds create an even larger contrast to promote the three-dimensionality and the confrontation of the taotie.